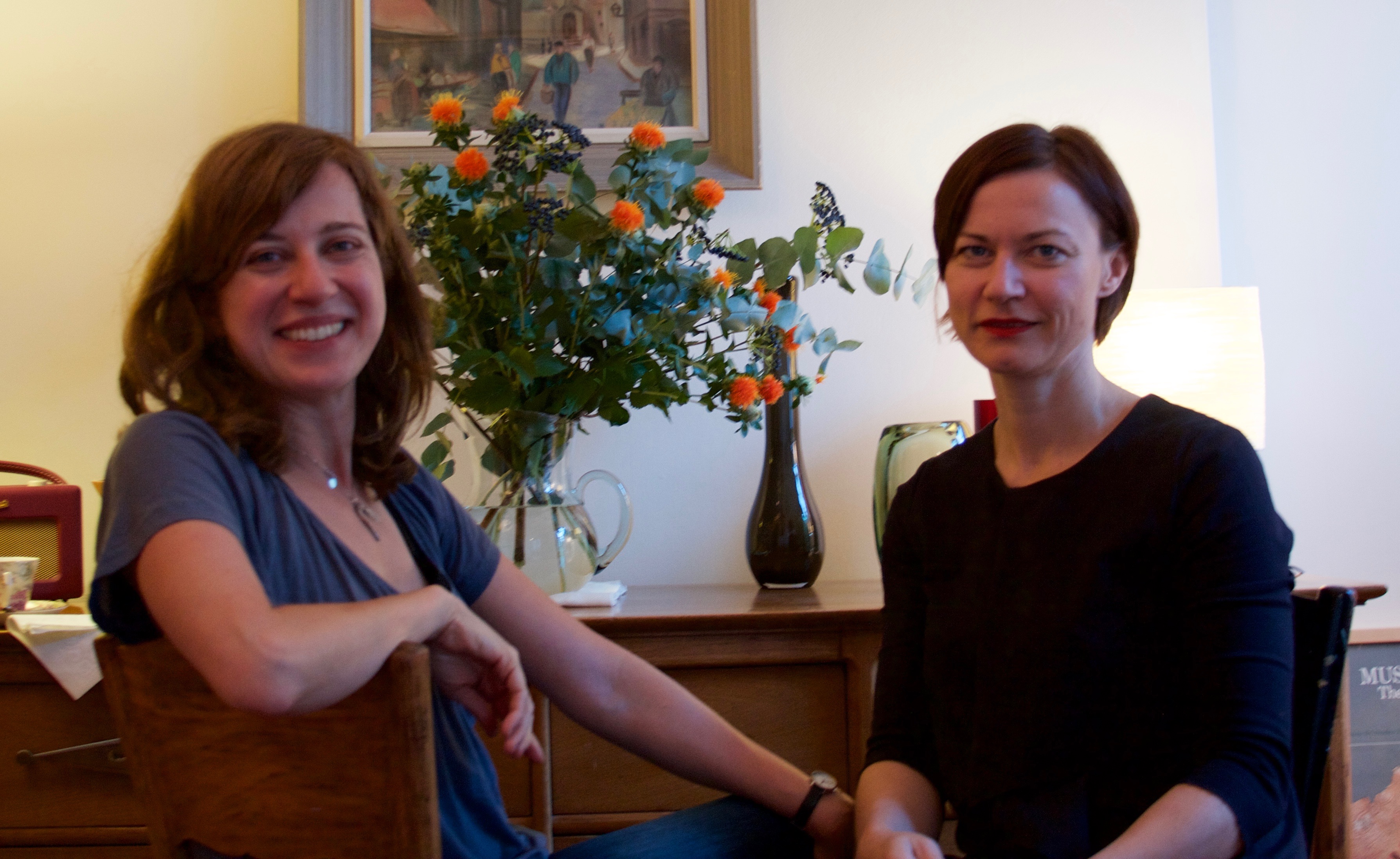 Barbara Vollath and Karen Glossop met in London in 2013, when Barbara came to the UK for a one-year secondment.

Barbara now lives in Munich, although she has travelled across many other countries, fuelled by her love of different languages and cultures. Barbara has worked for a leading German reinsurance company for 15 years. She heads a team of nine people, mainly dealing with Asian and African markets.

Karen has lived in London since she was nine years old, although she was born in Toronto, Canada. She read Classics at Cambridge University and afterwards trained as an actor. She now combines a career making theatre as part of the award-winning creative partnership Wishbone, and working as a consultant in communication and leadership at UK business schools and with private clients.

Karen and Barbara were mutually intrigued by the differences and similarities between their values, lifestyles and work. They began a series of conversations discussing ideas, arts and current affairs.

This first dialogue took place in a café at Tate Modern in June 2015. The Tate Gallery manages to combine an identity as a high art mecca and a commercial blockbuster. Creativity and innovation have become buzzwords for success in business, but what do these words actually mean? Are arts organisations and corporates talking about the same concepts when they use this language?

KAREN                A few years ago, I learned a great technique for deciding what ideas for a script are worth developing from the writer and film-maker Paul Schrader (Taxi Driver, American Gigolo, Light Sleeper). We drove all the way up to Nottingham for the masterclass, and I don’t regret it. Schrader advised us to take a friend out for a beer or coffee, and pitch them whatever half-baked idea we had for a story. He admitted that you would have to improvise anything you hadn’t quite sorted out in order to keep it coherent and flowing for the listener. The only rule was that you had to stop two thirds of the way through the story and make some excuse to get up – to go to the loo or to buy another drink at the bar, whatever. When you joined your friend again, you had to change the subject and talk about football or anything but the story you were pitching. Schrader said that if your friend didn’t impatiently sweep away the new topic and demand to know what happened next in the story, this was a sure-fire sign that you should abandon working on that script straightaway. It wasn’t good enough. You had failed and you should be glad that you’d found this out before you invested another six months, only to find out then that you had wasted your time. I was thinking about the parallels between Schrader’s approach and your experience with the innovation lab.

BARBARA            That’s right. Where I work, in the insurance industry, the environment is changing drastically. Digitalisation is taking over, globalisation means money is becoming very fluid, and the low interest rate environment brings many more players into the game. We have to actively steer innovations in order to keep our leading market position. One approach we’re taking is to set up an innovation lab. This is a room that is outside the daily business and the daily routine. It is a space where together with our clients we prototype ideas that respond to their needs. Exactly like your example about Paul Schrader, we test them with the client immediately. That way it is much easier to kill your darlings. We’ve chosen to use real materials such as, for example, lego, to build our prototypes. This helps visualize the financial process or product. We feel it is much easier to talk about something physical than about someone’s ideas. And it helps you develop a certain distance with your own ego, as everybody knows that it is early stages and the maker has not yet got committed about it.

KAREN                … So the stakes are quite low, if you share something at an early stage… And definitely with Wishbone’s work-in-progress showings, we had very mixed responses, not unanimous at all. But then you have to learn how to use the feedback…

BARBARA            Indeed, I think designing a product is an iterative process. And again, the main hurdle is to overcome your own preferences, if you discover that they undermine your client’s needs. However, I have to admit, that I still struggle with the fact that you are showing prototype theatre pieces to your audience. That contradicts in a way my understanding of arts and artists.

KAREN                Well, it’s true that not all artists are as collaborative as the corporate design process that you describe. Collaboration, I think, is a great way to involve audiences in the artwork.

BARBARA            Interesting. I feel that artists want to express rather than design.

BARBARA            LAUGHS Well, I didn’t want to accuse you of that! We all have the same impulses. Perhaps that’s just human and universal.

KAREN                But why can’t self-expression and collaboration be compatible? Why you would think that an artist would say: no, I’m holding on to this idea and you can only have it when it’s ready? And it needs to have my imprint on it, and I can’t let you dilute it. I have to make it brilliant, and when it’s brilliant, you’ll like it. I’m not convinced this attitude is typical.

BARBARA            I think it is because artists’ intrinsic motivation is to express themselves, their ideas and interpretations of a subject or their technical or aesthetic skills. Whereas in a company, you know that you serve the stakeholders’ requirements. You need to increase topline and profitability and that is by creating something that the client is prepared to pay for. So you design something specifically for your client regardless – to a certain extent regardless – on how you feel about it. Or that’s the theory. Eventually it will also not be your idea, but a concept that is based on the input and approval of many others.

BARBARA            Yes, whereas as an artist you want to set up your own brand, your own idea, or your own techniques.

KAREN                Hmmm…. It may be my own work, but it still matters to me that it connects with others. Ok: I believe to be any kind of an artist is to suffer from an addiction. I’ve always been compelled to make up stories and perform for an audience for as long as I can remember. I’d do it whether I was paid or not, because it doesn’t feel like I have a choice. Often we can’t make money from our shows – we barely cover our costs – even though we’ve had critical acclaim and great audience feedback. This isn’t unusual, but that’s not a very sustainable lifestyle, is it? That’s why artists are so interested in how business delivers profit in return for products or services. In a capitalist society, artists have to set up their own brand to differentiate themselves within a crowded market. To make a living. But it’s something I think a lot of artists, um… struggle against. Artists often get uncomfortable about the idea of themselves as brands. They have to borrow the language of corporate business although they’ve probably made a deliberate decision not to be part of the corporate world. Even though there are many people who choose to do commercial creative work… possibly creating apps. Some coexist in both worlds, creating apps for games by day, writing novels by night. For instance, I coach and train business people in creative communication techniques as my day job. Not everyone is a purist.

BARBARA            So you don’t agree that as an artist you want to use your skills simply to make your ideas explicit? And then show them to other people and wait for their reactions?

KAREN                Well, we do have to use the word ‘brand’. We do have to consider how we come across to people who haven’t necessarily experienced our shows. We’d be stupid not to engage in that. But artists often behave as if it makes them a little bit dirty to have to do that. And it’s really hard not to… I don’t know… feel ambivalent. I’m pragmatic, but I’d rather just get on and create the actual work, and not have to worry about marketing. But marketing is such a huge aspect of whether anyone’s going to see what you do.

BARBARA            It seems that setting up a brand, which is a very commercially driven idea, is a nuisance for you. Is the capitalist framework a bad environment for art?

KAREN                Yes, you’re quite right, there are tensions. However what’s the ideal anyway? If I were living in a communist society, for instance… Historically, it’s not been that easy to produce good art in that kind of environment either, LAUGHS, and the ones who do are…

KAREN                … yeah… are… dissidents, who often suffer. I think there’s a little bit of vanity in artists in that they believe they are, in whatever kind of society they find themselves in, somehow dissident.

KAREN                I think… um, deciding to make art in a society that doesn’t particularly value it for its own sake is a political thing to do. I think society generally values art for it can be sold for. PAUSE But I don’t think human beings are like that. If something’s really good, human beings do connect with it. But I’d understand if you were sceptical, because if you look round this café and the exhibitions here, most of the visitors are middle-class people who have been trained to enjoy and understand what’s going on here. It could look like art appreciation is limited to consumers who spend enough money in the gift shop to make it profitable. It’s political to aim beyond that group, otherwise art has exactly the same goal as business: profit. There are obstacles to making art genuinely accessible to everybody though. That’s why it’s so important to have school-groups coming to places like this.

KAREN                Ok… there are challenges for anyone in assessing what the value is of art. This POINTS AT PHONE has an obvious, literal function. You know, if we can’t make phone calls on it, or receive email or send texts, or use apps on it, it’s no good. Whereas I could create a piece of art and we could really argue about whether it’ s any good or not. There isn’t any kind of objective test.

BARBARA            And wouldn’t you say that the difference between an artwork and an app isn’t so much commercial, but that the app is more intended to… to solve a problem that a user has?

BARBARA            So being creative would mean being self- concerned. Whereas being innovative is being concerned about the client.

KAREN                Well, if my art is good, my solution to my problem has to have resonance and meaning for the audience too. There’s no compromise between my audience’s needs and my vision. It’s the connection between the creator and the audience that completes the solution.

BARBARA            In fact, business too is going in this direction. We want to lock in our customer, and community is a sustainable way of doing it. But it’s a big challenge.

KAREN               Does that mean that art and business are coming together culturally?

KAREN                I’m not sure if artists and business people will ever become the same as each other, because there are some radical differences, but there is probably already much more overlap than we acknowledge.