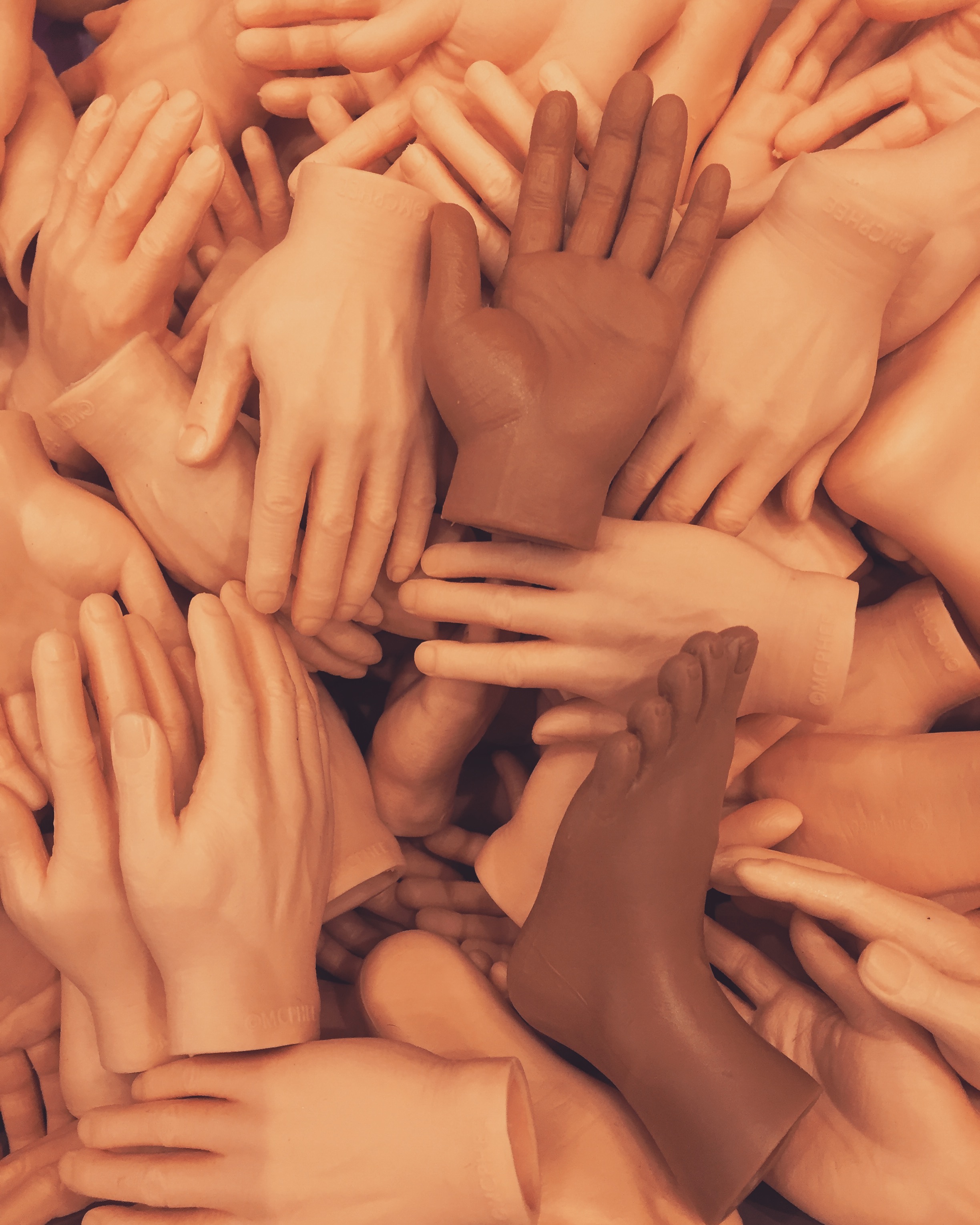 Popular images of leadership don’t do much to promote the benefits of collaboration. We often think of a solitary figure: an individual striding resolutely down a wide road, arms swinging, perhaps with an obedient crowd trailing behind; or someone atop a hill, one hand positioned as an eyeshade against the blinding light of the promised tomorrow. Whatever, up a hill or down a road, the leader is always essentially alone and aloof.

I wonder if these are misleading and even unhelpful representations of leadership? A leader who is cut off from the team is disconnected from broader perspectives and opportunities. A leader who speaks at people, not with them, is in trouble. This leader is ill-equipped to convince others to buy into any vision for the future and liable to topple into an abyss after tripping up over unintended consequences. Ouch.

Post-match analysis of crashed political campaigns and brands tarnished by tone-deaf pronouncements from CEOs usually points to the absence of proper communication with stakeholders, where people can talk back to power.

My preferred image is of a leader facing the crowd – engaging and responding – and also creating the conditions for a continuing conversation. There might be the murmur of good-humoured laughter, perhaps a gasp of surprise, some interjections or even heckles, and ultimately, of course, the sound of applause. Above all, there’s a feeling of togetherness and warmth even when the message may be serious. So how does one go about achieving this cosy ideal?

There may be various paths. Certainly a good hard look at current practices might be a good idea. There is so much we accept by default that is in fact counterproductive – boardroom seating arrangements, PowerPoint slides loaded up with text, scrupulous avoidance of emotion along with a firm commitment to such tight controls over messaging that speakers are robbed of a sense of ownership. Disengagement and boredom are institutionalised.

I have a regular commitment delivering a one-day workshop called Voice Vision and Vitalityon the Oxford Advanced Management and Leadership Programme at Saïd Business School. Under the aegis of Voicecraft, I and four other colleagues work with small groups exploring how they can communicate as leaders with more depth and creativity.

The programme participants form an extraordinarily diverse group. They are a global mix of Senior Executives, each embodying different organisational cultures and different national values. They celebrate their differences at a Cultural Diversity Dinner, which is always held on the eve of our workshop. Each participant brings a personal cultural icon to talk about as an entry point into their national identity. At the most recent dinner, a chopstick-wielding Chinese participant rubbed shoulders with a gun-toting American. (He didn’t bring a real gun). There are always some are interesting hybrids too – such as the Englishman who had spent nearly all his adult working life in South and Central America. There are never enough women in the group, although they always offer powerfully different perspectives from their male colleagues. All these characters are thrown together to learn from each other as well as from the esteemed Faculty and other sundry professionals, such as us Voicecraft tutors.

Collaboration isn’t the explicit objective of our workshop. It does, however, underlie all our beliefs and values about what true communication is and how to do it well. Crafting the experience for the audience is a collective effort in the theatre, where the director is not the sole voice of inspiration.

Voicecraft is an umbrella organisation of independent communication training consultants. We all have theatre credentials, and some of us still work as innovators within the arts, as I do. However, just as we are more than actors, the Voicecraft team is more than the sum of its parts. Inspired and nurtured by Arts and Business pioneer, Yvonne Gilan, the team has grown exponentially in experience and expertise since it was initiated in 1997. Creative collaboration is at the heart of our own practice. We continue to mentor each other so that we can continue to coach all our clients to the best of our collective talents. So, you could say that we practice what we preach.

Even though we have delivered this particular workshop format many times, it’s always a unique experience because the range of personalities and talents that we work with always changes. We have a set schedule of exercises and games that incrementally build risk and confidence of the individuals. Along the way, we feed them tools, techniques and approaches from the theatre. We provide simple parameters for testing out how they will meet some fundamental challenges that leaders experience facing an audience. Through playing and telling stories, they discover how to harness their own vulnerability. In the process, they may discover what charisma looks like on different people. Sometimes extraordinary things happen.

Inevitably, this process stirs the participants into reflection and imagining how they will bring their new insights and skills back to work. In the latest workshop, the following issues came up for deliberation amongst us:

Why do people resist rehearsing?

During the preparation stage, I noticed that participants were happy to discuss ideas in small groups or pairs. They would have been happy just talking for their entire allotted time if I didn’t prod them into getting up and testing out how they were going communicate their vision. This is something that I have seen before with other groups. Over the years I’ve heard a range of opinions against rehearsal: it makes your ultimate performance stale; there isn’t time; it’s just not very important or necessary; there are other just as effective ways of preparing for presentations, such as thinking it through in your mind.

As a theatre practitioner, I’m deeply immersed in the rehearsal process for developing ideas and polishing them until they’re good enough to put in front of an audience without embarrassment. This time, rather than simply calling out the behaviour, I was interested in delving a little deeper into the psychology behind this.

Everybody in the group acknowledged the importance of rehearsal before a major presentation or speech, but nobody really wanted to do it.

One participant explained to me that it’s not that preparation isn’t taken seriously. It just that instead of a culture of practising, the attention is all on the slide deck. He described to me how the slides were assembled by committee and then, over a period of weeks, batted up and down the hierarchy, with slight edits inserted here and there, and then deleted again, until the final deck closely resembled the original version. There was no energy left for rehearsal although still plenty of anxiety. It seemed to me that nerves had been displaced onto Powerpoint, instead of usefully channelled. And because no time or energy is ever allocated for rehearsal, it remains outside everyone’s comfort zone.

Is there a particular value to creative collaboration?

However, when I did manage to coax this group into practising, they took to it with gusto. My success at converting people seemed to be at least partly due to their discovery – once they’d started – that dynamic, collaborative preparation can be a hugely pleasurable activity.

The other persuasive factor was the evidence that it works. The ultimate result was that their performances were of a high standard. That was my judgment as a professional theatremaker, and the group members enthusiastically concurred.

I had divided the group into pairs for this exercise and laid down simple parameters: take turns to present your pieces to each other and ask for feedback and direction. Beyond this, the process of each small unit was unique. People spoke from both the perspectives of director and performer. As performers, they credited their achievement in most part to how their rehearsal partners worked with them. As directors, their pride in and respect for their performers was evident. There were many different experiences, but everyone felt enriched and believed the outcome was better than it would have been without working together.

Developing your own creative, iterative process with others, who have a stake in the vision and in you as a leader, allows you to hone both the vision and its communication. Collaboration makes the message and its impact better.

These were the key findings when we de-briefed afterwards. However, the real test will be how they use the learning when leading their organisations. Will they have the courage to apply the tools and insights?

Taking the lessons back

Some of this work may seem dauntingly radical, particularly for some organisational cultures. It may go against deep-seated attitudes and long-established practices. It will also require judgement about how you can harness your vulnerability as you embark on this adventure, rather than becoming a hostage to it. So I will suggest a few practical tips: